Wherever there is a demand, enterprising individuals and companies come forth to fill that demand.  This is the basis of the free market.  People are willing to pay for goods and services.  But there are also artificial needs.   When government dictates that automobiles must meet certain emission standards, companies (or thinly disguised government agencies) materialize to provide testing and certification for automobiles.  When politicians create war, plenty of bids are forthcoming to manufacture ever more deadly weapons.  Millions of attorneys owe their livelihoods to the vexing web of rules and regulations we call “the Law”.

So it is with diversity.  Government demands that large businesses keep certain quotas of “minorities” in their hiring.  Even when there may be no specific law stating that such and such number of blacks must be hired, nevertheless a de-facto law exists where companies risk expensive lawsuits if they do not comply.  Powerful entities, such as the Congressional Black Caucus and the NAACP stand ready to enforce these quotas.  Companies live in fear of them.

Though most will deny it, it is obvious to all but the most dense that pure* blacks do not generally make the best employees.  (If they were better employees, or even just as good as whites – but with the added benefit of “diversity” – then companies would not need to be forced to hire them; they would do so on their own to enhance their own profits.)  I have seen this in my own experience; the truth is obvious for all to see – but none dare speak it.  So, it is in a company’s best interest to avoid hiring blacks.  I’ll point out the obvious and note that some pure* blacks are excellent employees – but, like so many other things in the business world, this is a numbers game.

How do companies reconcile their best interests with the demands of government in this case?  The answer is mulattoes.  A mulatto tends to be more intelligent, hard-working and agreeable than a pure* black.  The “one-drop rule” is helpful here; even a person whose great great grandfather was black can consider himself “black” and help his company fill its quota.  So, by “mulatto”, I include quadroons, octaroons etc. for this purpose.

The very same government that created the artificial need for blacks, also takes advantage of this same loophole.   Many “blacks” who occupy higher government offices are mulattoes.  Collin Powell, Eric Holder and, of course, Barack Obama are all mulattoes.  Of course, when it comes to membership in Congress, higher intelligence is not a requirement.  The only qualification for becoming a Congressman is to win a popularity contest.  But, for appointed offices that require actual thought and planning, while including high visibility, mulattoes are the perfect fit.  Unfortunately for us, in their quest to prove their blackness, mulattoes are often the greatest haters of whites.

Mulattoes in government mean more oppression for whites.  Mulattoes in business, useful as they are for keeping companies out of trouble, are still affirmative action hires.  Therefore, they will tend to be of inferior quality compared to whites and they will tend to lose money for those businesses.  These losses are passed on to us in the form of higher prices for everything.

Affirmative action, and the quotas it entails, increases the price of products and services – but it cheapens the people who most often buy them.  Within this caste-system, mulattoes command a higher price than whites or blacks. 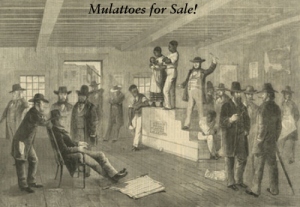 *by “pure black”, I mean somebody whose ancestry is overwhelmingly black African.

I am a paleolibertarian Jew who is also a race-realist. My opinions are often out of the mainstream and often considered "odd" but are they incorrect? Feel free to set me right if you believe so!
View all posts by jewamongyou →
This entry was posted in government/corporate discrimination against whites, miscegenation, racial differences and how they manifest themselves/race science. Bookmark the permalink.

12 Responses to The mulatto industry