“Hispanics” were created by Jews*

Thanks to HBDchick for linking to this CNN article, which claims that Christopher Columbus was a Jew. Of course, I’ve heard of the theory before; it’s even mentioned in the “Ashkenazi Revolution”. But the clincher is that Columbus included the Hebrew letters Beth/He at the top of the letters to his son. In my opinion, if this is true, it is pretty much conclusive evidence. 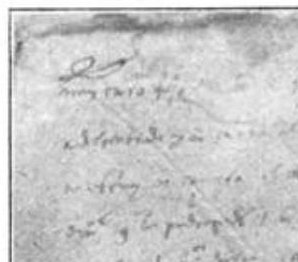 The symbol is visible (not very clear, sorry) at the top left. To those familiar only with Israeli/Ashkenazic script, it would not be recognizable. But to those familiar with traditional Sephardic script, it’s easy to see how it could be the letters Beth/He.

Columbus wasn’t the only Jew on that fateful voyage. There were at least 5 other Jews with him. One of them, Luis de Torres, was the first to settle in the New World. Torres spoke Hebrew, and…

When de Torres had landed on Hispanola he saw a bird which he thought was a peacock and named it TUKI, the Hebrew word for that animal. We therefore call it turkey.

So, since it appears that Jews financed Columbus’ voyage, that Columbus himself was a Jew, and the expedition was partially manned by Jews, we can say that it was Jews who brought about the creation of the larger Mestizo ethnic group now known as Hispanics.

So I was wondering… Is it too late to change our minds about this? Isn’t there some sort of “undo” button we can press? If so, the “Hispanics” would go back to speaking their respective native languages, worshiping their old gods, owning their ancestral lands and (best of all) they would be able to keep their own best women for themselves instead of letting the Spanish have them. For our part, “Latin America” might be a place to visit exotic tribes in their natural state, to study the various cultures and languages and to explore unspoiled jungles – not a source of untold millions of illegal immigrants who want to transform our own country into their own image.

* For those who don’t know me very well, not everything in this post is meant to be taken seriously.

I am a paleolibertarian Jew who is also a race-realist. My opinions are often out of the mainstream and often considered "odd" but are they incorrect? Feel free to set me right if you believe so!
View all posts by jewamongyou →
This entry was posted in immigration/ Hispanics, Jewish stuff and Israel. Bookmark the permalink.

15 Responses to “Hispanics” were created by Jews*