A surprise trip from JAY

Well folks, you may have  been wondering why I haven’t posted anything for a while. The reason is… I just got back from Costa Rica. Unlike Ethiopia, this wasn’t for adventure; it was mostly about relaxation – but I did see some cool animals. When I get my photos edited, I’ll share them with y’all.

I stayed, most of the time, on the Pacific coastal area. Every person I talked to over there (whether tourist or native) warned me that the Caribbean coast, being inhabited mainly by blacks, is dangerous. Also, the Caribbean coast is rainy this time of year, and I’ve have plenty of that right here in Portland.

Costa Rica is half-way between being a third-world country and a first-world country. It’s trying mightily to become as much like the US as the US is supposed to be. The water is safe to drink, electricity is reliable (using the same plugs we use in the US) and natural areas are cherished and preserved. On the other hand, they drive like maniacs. On an intercity bus, I sat in the front-row seat and observed the driver turning his head toward a passenger repeatedly; his conversation was more important to him than keeping his eyes on the road. He also spent a lot of time picking at a zit on his nose while using his cell phone as a mirror. When he felt thirsty, he nonchalantly stopped the bus to purchase a coconut. The lives of some 50-60 people were in his hands, and his complacence was unsettling.

Just as we have hordes of Mexicans swarming over the border to find work, or take advantage of our welfare system and commit crimes, so too does Costa Rica have its migration problem: Nicaraguans. The Costa Rican government does not enforce its border, nor does Costa Rica have a military. So Nicaraguans, whose own country is highly dysfunctional, enter the country in droves. They tend to do menial work, and don’t have a good reputation overall.

There are some amazing birds in Costa Rica. It was surreal to see flocks of macaws flying overhead in formation. It put such a big smile on my face, my jaw almost dropped off. There are also a lot of crocodiles. Apparently, sometimes they eat Nicaraguans.

Here’s one photo I’ll share with y’all. Apparently, they had a big negro sale in December! 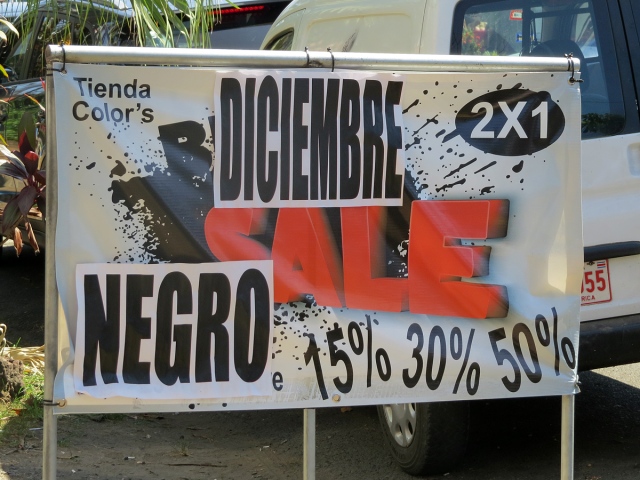 For more details on my 2-week trip to Costa Rica, check my travel blog. I’ll be posting there.

I am a paleolibertarian Jew who is also a race-realist. My opinions are often out of the mainstream and often considered "odd" but are they incorrect? Feel free to set me right if you believe so!
View all posts by jewamongyou →
This entry was posted in travel, Uncategorized and tagged Costa Rica. Bookmark the permalink.

6 Responses to A surprise trip from JAY