Posted on November 1, 2019 by jewamongyou

Thanks to Paul Joseph Watson and Diversity Chronicle (and “Charlie”) for this one: 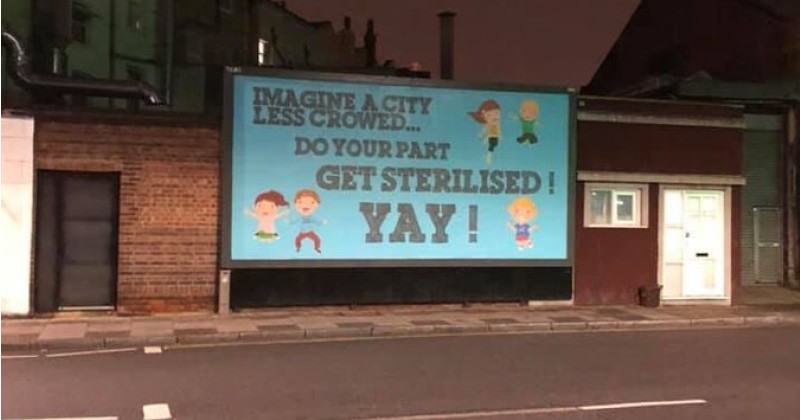 A billboard has appeared in London encouraging white people to sterilize themselves to solve overpopulation.

The sign, which was put up on Holloway Road, says “Imagine a city less crowded… do your part–get sterilised! Yay!”…

The advertisement betrays a noticeable lack of ‘diversity’ as it only features caricatures of white people and no people of color.

It amazes me that some people are still in denial that there is a concerted effort to eradicate whites from the face of the planet. This is what “soft genocide” looks like.

Read the original article for more.

I am a paleolibertarian Jew who is also a race-realist. My opinions are often out of the mainstream and often considered "odd" but are they incorrect? Feel free to set me right if you believe so!
View all posts by jewamongyou →
This entry was posted in examples of propaganda, government/corporate discrimination against whites and tagged anti white propaganda, genocide against whites, whites sterlize. Bookmark the permalink.

1 Response to London billboard encourages whites to sterilize themselves