Generally speaking, leftists will downplay natural distinctions, while rightists will enshrine them.

Hence, race-denialism is consistent with the leftist mindset. So too is gender-denialism, or rather the substitution of natural gender with man-made concepts. This also goes hand in hand with the left’s strong belief in nurture over nature.

In a 2016 article on Inverse.com, Megan Logan tells us:

Relationships between humans and humanoid aliens is something of a staple on Star Trek. A part of the Trek canon from the outset, interspecies mating isn’t uncommon on the show and makes for some really interesting social commentary about prejudice and diversity…

Relationships between very different alien races coming from very different backgrounds help to overcome stereotypes, prejudice, and barriers put in place by the galactic “society.” Star Trek has always been casually progressive when it comes to race and gender, and extending the forward-thinking principle of equality and respect for all to interspecies relationships seems the logical next step.

It was this sort of mentality that lead to a series of experiments where chimpanzees were raised among humans, in the hope that they’d grow up to be just like us. The last of these experiments was orchestrated by Professor Bill Lemmon, who was eccentric, and described as a “proto-beatnik.” I don’t know if he would be considered “leftist” today, but the notion that behavioral/academic disparities can be eliminated through the right intervention and opportunities is a strong pillar of leftist thought.

The following article was written by Huyen Nguyen for Quora, and is reproduced with his/her permission:

At the turn of the last century, a bold scientific vision emerged – to create a humanised ape. Some scientists imagined that such a creature would become the ideal worker, both strong and intelligent. Yet, despite intensive training, the apes remained frustratingly obstinate and difficult to domesticate. The goal of creating a slave faded and was replaced by the desire to find an intelligent companion. It was also of great scientific interest how different we are from our cousins and whether we are unique in our mental capacity.

Baby apes do look a lot like humans and are quite adorable. It was believed that if placed in caring human families, apes would grow up human and be able to talk and reason like us. Apes were believed to be like feral children, who possess innate, human-like intelligence that can be nurtured in an appropriate environment. 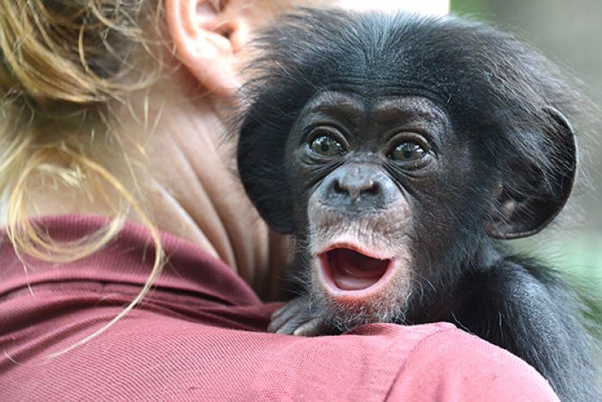 By the 1960s, there had been a few home-rearing experiments, all of which were difficult and made people realise that raising an ape among people didn’t magically turn it into a human. Bill Lemmon, an eccentric professor at the University of Oklahoma was not ready to give up yet. He reasoned that the previous experiments were unsuccessful because they started too late in the ape’s life and ended too early. He found two colleagues, Maurice and Jane Temerlin, who were willing to serve as the host family.

In 1964, Lemmon acquired a newborn chimp from a zoo in Florida. The chimp was named Lucy. The Temerlins honoured their promise and treated Lucy like their own daughter. Lucy ate at the table with the family and played with neighbourhood kids. She was taught sign language and mastered over one hundred words. Amazingly, she was taught to hug people and even make tea!

But gradually, her chimp nature became apparent. Lucy would often climb on things and turn the house into chaos. The strangeness of the experiment grew as time went by.

When she was three, Maurice noticed she enjoyed eating rotten apples in the yard. He realized that the fermented fruit was making her high, so he gave her alcohol before dinner. Soon, she was having cocktails every day with her ‘parents’.

Maurice was curious whether Lucy would develop any sexual interest in him. Luckily, she didn’t and tended to avoid him whenever she went into oestrus. When the Temerlins introduced her for the first time to a male chimpanzee, she was frightened and did not relate to him, let alone find him attractive. But she made explicit sexual invitations towards other men. She was even provided with copies of Playgirl magazine, which she greatly enjoyed. Maurice made a disturbing revelation that “Lucy attempts to mouth my penis whenever she sees it, whether I am urinating, bathing, or have an erection”, which later cost him his university job. There was a limit how shocking a scientific experiment could go, he found.

After ten years of raising Lucy, who was becoming increasingly violent and destructive, her parents had grown tired of it and longed for a normal life again. They faced a difficult question: what to do about Lucy?

They found an option that seemed promising: a new experimental chimp rehab centre in Gambia where captive chimps were taught survival skills and then released back into the wild.

In 1977, the Temerlins, Lucy and a young grad student, Janis Carter arrived at Abuko Nature Reserve. When it was time to leave, Carter hesitated. Lucy was clearly suffering in the foreign environment, scared and confused. Carter realised that if they all left, Lucy would probably soon die. So she made a brave decision to stay and help Lucy.

After her parents left, Lucy stayed in a protected enclosure. She sulked and avoided other chimps. After all, she had never been among her species before. Meanwhile, Carter took care of a few more orphaned chimps. After eighteen months of little progress with Lucy, Carter decided Lucy needed a more dramatic break with human civilisation. She took the chimps into the jungle.

She slept inside a wire cage at night for protection. But the chimps, fearful of the jungle, tried to stay as close to her as possible. In the next few weeks, she taught them how to be chimps again, how to sleep in the trees and how to forage the forest. All the other chimps made good progress but Lucy, who longed for her previous human life. Lucy refused to adapt to her new reality. It was not until Carter decided to withhold food and attention that Lucy began to budge. After Carter grew more confident of Lucy’s ability to survive, she visited less and less often.

In 1986, nearly a decade after the trip to Gambia, Carter returned to visit Lucy, bringing her some gifts from back home. A moving picture captured them hugging each other. But Lucy wasn’t interested in the gifts from her old life and walked back to the jungle. She died one year later of unknown cause. 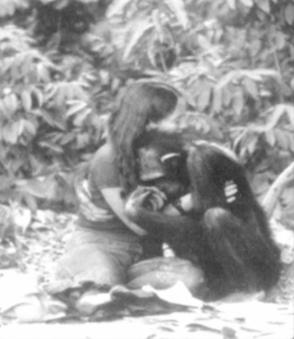 Her death marked the end of a century of attempts to humanise apes. Today we know that there is no evidence apes possess a linguistic capacity similar to human. It remains impossible to domesticate apes and illegal to own, purchase or sell them in African countries. They aren’t going to be our prime mates anytime soon.

Not everything that somewhat resembles us is “just like us.” Be compassionate – but respect boundaries and borders.

I am a paleolibertarian Jew who is also a race-realist. My opinions are often out of the mainstream and often considered "odd" but are they incorrect? Feel free to set me right if you believe so!
View all posts by jewamongyou →
This entry was posted in shenanigans of the Left and of non-white activists and tagged adopting a chimp, chimp experiment, Lucy the chimp, Professor Bill Lemmon, star trek interspecies love, star trek relationships. Bookmark the permalink.