I recently posted about the Portland government’s efforts to find discrimination against blacks and Hispanics.  Now housing commissioner Nick Fish has released the names of some of the “suspects”.  It should be no surprise that the MSM is not bothered by the fact that such witch-hunts inevitably lead to anti-white discrimination.  For the benefit of those less informed, I’ll explain it:  If you are unkind to a white person, you won’t get his business.  If you are unkind to a “person of color”, you might get busted for “discrimination” and have your life ruined.  These are the two types of citizens in today’s America, white and “people of color” and you’d better treat the latter with great deference.  It does not take a university degree to figure out that this policy will lead to worse treatment toward whites overall.

In a recent issue, The Portland Mercury berated the hopelessly anti-white media, including itself,  for taking too long to report the details of this investigation:

The paper patted itself on the back by noting Fish’s letter “came four days after an article in the Oregonian detailed how the city had no concrete plans to enforce the law against the landlords and hadn’t even notified them they’d been tested.” A column by Anna Griffin complained that Fish had “screwed up” by also asking a committee, already exploring housing discrimination in Portland as part of the renewal process for federal housing grants, to review the findings.

Advocates and other housing insiders, interestingly, all noticed what the paper didn’t mention in its cries for action: That it had been asleep at the wheel—along with every other news outlet in town, including the Mercury. The Oregonian‘s first story on the audit didn’t hit print until nearly three weeks after Fish’s office announced the results, way back on April 20.

It seems that being anti-white is not good enough; the newspapers must be quicker and more vicious in their condemnation of whites.  Perhaps daily calls for internment camps and mass shootings of whites would make the Mercury happy.

I found it interesting that, according to the Mercury, a majority of housing discrimination cases do not even relate to race at all:

Of all the statewide complaints, more than half (164) involve someone with a disability. That’s almost twice the combined total of cases involving race (48) and ethnicity (37).

This being the case, why is all the focus on racial discrimination?  A search of the Oregonian’s website yields practically no stories about housing discrimination based on disability; all of the stories revolve around blacks and Hispanics.  The Mercury also seems to lack any stories about disability discrimination in housing.  The answer, of course, is that race overrides all other priorities among leftists.  More specifically, the promotion of blacks.  The editors of the Mercury, being typical leftists, reveal this priority both explicitly and subliminally.  Here is a screenshot of the page I quoted above: 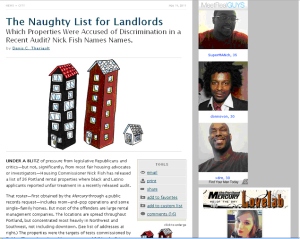 It is no coincidence that all the “real guys” are black and that the woman is white.  In the mind of liberals, blacks are still slaves and white women are still the daughters of slave owners.  They believe that by showing them together, thus encouraging the mating of the two, they are courageous revolutionaries who seek to overthrow an oppressive status-quo.

But we come full circle here, for the ultimate goal in the establishment, and enforcement of, housing discrimination laws is to ensure that white women will breed with black men.  This is why so little attention is paid to disability discrimination.  If able-bodied whites mate with disabled whites, the offspring are still white – and nothing is accomplished.  We can now also understand why the MSM is not bothered by the ramifications of the caste system they promote; they actively seek second-class status for whites.  Since, according to the Left, whites are racist and evil, and have been so since time immemorial, it believes there is only one solution – The Final Solution.

I am a paleolibertarian Jew who is also a race-realist. My opinions are often out of the mainstream and often considered "odd" but are they incorrect? Feel free to set me right if you believe so!
View all posts by jewamongyou →
This entry was posted in examples of propaganda, government/corporate discrimination against whites, miscegenation. Bookmark the permalink.

6 Responses to More murky reasoning from the Portland Mercury