I’ve been a bit overwhelmed by recent events, and that’s why I haven’t been posting; I always ask myself: Where to start?

Firstly, I know that some of y’all are feeling discouraged by the events in Charlottesville and the aftermath. So I’ll give y’all my take on it:

Don’t give up. Don’t curl up in the fetal position and say, “I’ll just keep a low profile and stay out of the fray. It’s not worth speaking my mind under such circumstances.”

On the contrary, we’re in a struggle and we must keep fighting. If not for that, we’d be a bunch of useless eaters – just like so many other Americans. What’s the point of living if you’re not willing to fight for what is right?

What is right? Are we “haters?” I’ll share a video by a precious lady I’ve had the privilege of meeting a few times:

The reason I bring this up is that, though PhilosophiCat is right, we’re not speaking of the raw emotion of hate when we refer to it in this context. I’ve railed against hate myself, but I have nothing against the actual emotion of hate. Rather, I oppose the sentiment expressed in one of the comments on the above video:

I hate all non-Whites with a perfect hatred. If you don’t hate non-Whites don’t even bother calling yourself a White Nationalist. You either hate your enemy or become subjugated by them. What kind of warrior can you be if you’re afraid to make your hatred known?

Some people, who associate with the Alt-Right, actually feel that way. That’s sad, but it doesn’t detract from the fact that white people exist, white people have the right to exist, and white people need to fight for their own survival.

It doesn’t negate the fact that the desecration of Southern monuments represents the lowest form of human depravity. Those men fought valiantly for their homeland. Nobody in Antifa can boast even a small fraction of the courage that Southerners displayed in their struggle, whether you agree with their cause or not. How dare those Antifa vermin desecrate the memory of men who gave their lives for their country? Past generations of Yankees at least had the decency to respect the memory of their vanquished foes, but this generation of so-called “leaders” and mobs have descended to the point where they’re not even worthy of the term “human.”

Here’s something that was recently posted on the Jewish Alt-Right group: 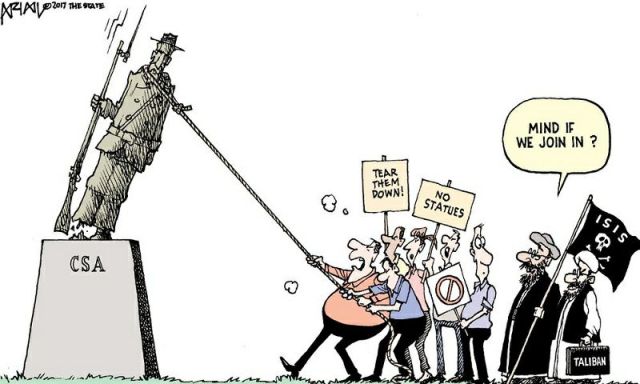 I am a paleolibertarian Jew who is also a race-realist. My opinions are often out of the mainstream and often considered "odd" but are they incorrect? Feel free to set me right if you believe so!
View all posts by jewamongyou →
This entry was posted in crime and violence, government/corporate discrimination against whites, politics and attitudes of the pro-white movements, the South. Bookmark the permalink.